Flask on Heroku! Seems a complete gibberish if you encounter them for the first time. But to me, for what I intend, they are very precious tools for any web developer.

In a previous post I created a small function that allowed bringing data from World Bank’s World Development Indicators and producing nice charts. In this post, I will build upon that function but wrap it into a web application so that the world can benefit from.

Flask as a web framework

Flask is a cool web framework that is very popular for those who want to build things quickly and enjoy the flexibility. Their slogan is web development one drop at a time. It is based on python, so we do not require to re-write the things we did locally.

My idea is to create a web app that brings you a trend chart on indicators based on what you provide is the URL. So, for example the following URL will bring you chart for:

The above link should bring me the following image 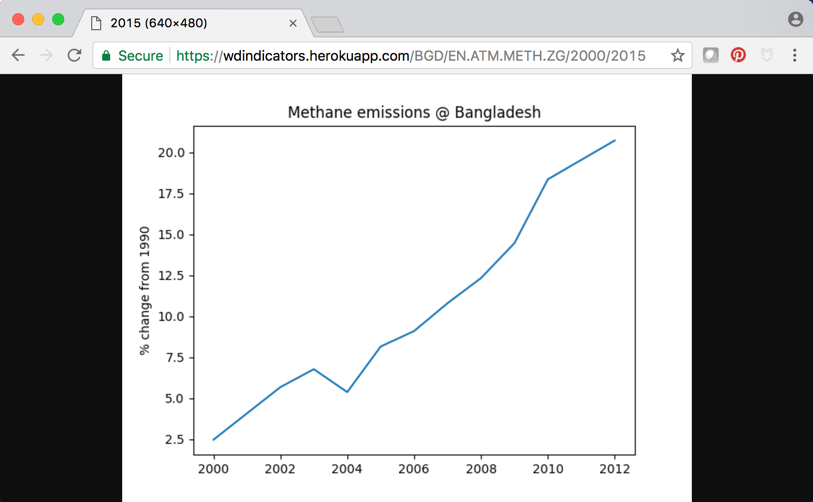 Here I do not intend to provide a tutorial on flask. For that you may visit the famous mega tutorial by Miguel, or set of nice youtube tutorial by Michael Herman.

Here is a rough sketch of the typical steps:

Here is my app.py file.

Here are few points to note.

In line 15 we created the decorator that represents the URL structure as shown earlier containing the four information we need.

Note that I have a csv file under my /static/ folder containing country codes which I read at line 18 into a dataframe called dat. This file is used to provide a mapping between the 3-alpha code in the URL and the actual name of the country (line 19), which I used to incorporate in the title of my chart (line 25).

As I said, refer to my earlier post for matters related to matplotlib charting.

Lines 41 - 45 are technical stuff for rendering a png image into an html page. I got hints from a number of pages among them is this page.

Heroku is not nonsense

The founder of Heroku invented this Japanese theme name by merging heroic and haiku. This nonsensical meaningless word after all proved to be very useful for web developers.

There are many other ways to deploy your flask apps to the world. Amazon has a wide range of free tire offerings. I have wasted some time trying that with no success. The problem is always importing pandas package in the remote servers. Please let me know if you were successful to deploy a flask app that has pandas on AWS. I would love to know how to do that.

Somebody pointed out a nice trick as a workaround to similar problem in Heroku. Just have Heroku first install numpy and then pandas in two separate deployments.

Here are the steps for a typical Heroku setup:

Now try my Heroku app with some samples below: