How can you decide if a certain year is ‘better’ than the previous year? Well, the economist will jump and say Gross National Product (GNP) is the solution. Just compare the GNP of these two years and decide which year is better. This measure of ‘goodness’ of time is very materialistic and fits well with our contemporary capitalist mindset that rule the world.

A little bit better measure would be Human Development Index or HDI. It incorporates -on top of GDP- other indicators like education and lifespan. 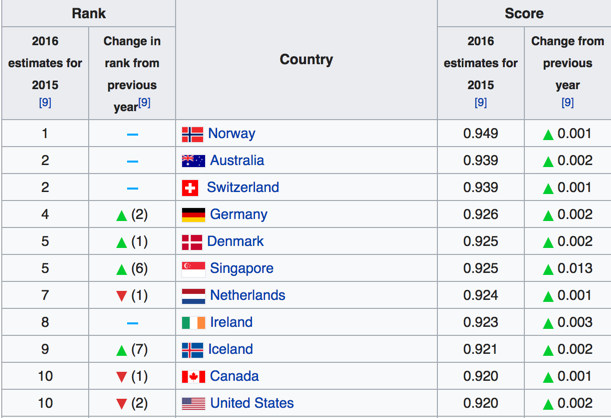 Observing the shortcoming of any materialistic or secular solution, the scholars even attempted to ascend higher in search for index of well-being or happiness.

Focusing on only materialistic gains from the point of view of big corporations and governments has already led to a dangerous world with threat to environment, increasing inequality, war and violence.

Columbia University economist Jeffrey Sachs illustrates why richness does not necessarily lead the society to happiness. He describes the Easterlin Paradox in the Earth Happiness Report.

The paradox that Easterlin noted in the U.S. was that at any particular time richer individuals are happier than poorer ones, but over time the society did not become happier as it became richer. One reason is that individuals compare themselves to others. They are happier when they are higher on the social (or income) ladder. Yet when everybody rises together, relative status remains unchanged. A second obvious reason is that the gains have not been evenly shared, but have gone disproportionately to those at the top of the income and education distribution. A third is that other societal factors – insecurity, loss of social trust, a declining confidence in government – have counteracted any benefits felt from the higher incomes. A fourth reason is adaptation: individuals may experience an initial jump in happiness when their income rises but then at least partly return to earlier levels as they adapt to their new higher income.

What Islam can offer?

Amidst all these dilemma and paradoxes, it is always relieving to turn to the Quran and Hadith in search for answers to big questions. No doubt Islam offers many many interesting insights for the mankind when it comes to well-being, happiness and prosperity in this world, let alone the unique information about key to salvation in the world hereafter.

Islamic scholars can research the topic at our hand within Islamic literature and provide a holistic framework of development and prosperity. However, here I would like to cite just one related Hadith and examine how it can provide a hint to our contemporary world.

Al-Hajjaj ibn Yusuf (b. 661 AD- d. 714 AD) was a tyrant governor of Iraq who served the Umayyad Caliph. People came to Anas Ibn Malik -the companion of the Prophet Muhammad -peace be upon him- complaining about the tyranny of al-Hajjaj. He consoled them saying: “Have patience, for no new time comes except that what comes after is worse, until you meet your lord, I have heard this from your Prophet” 1.

Abdullah Ibn Masud -another companion of the Prophet- further shed light on the meaning of the above hadith:

No time ascends upon you except that it is worse than the one earlier until doomsday arrives. I do not mean comfort of life or gain in money and property, but I mean no new day enters except that it contains less knowledge than the day before. Thus, when scholars depart the people are then equal (in ignorance), so they refrain from promoting good and preventing evil in society. That is the time when they are destroyed 2.

It is evident from the above two quotes that one important negative indicator of the ‘badness’ of a year is how many religious scholar died (or jailed or detained) in that year, as a result, the society is deprived from the benefit of their knowledge.

Mankind on this globe can sustain only by leading a lifestyle which the creator of this globe wants us to follow. The knowledge of how to lead such a lifestyle is available only to Islamic scholars who make sincere effort to preach this knowledge without fear or bias. When such sincere scholars die or are forcefully muted by state power then what is left are either ignorant public or so called puppet scholars of the corrupt governments. Under their mercy societies are doomed to destruction.